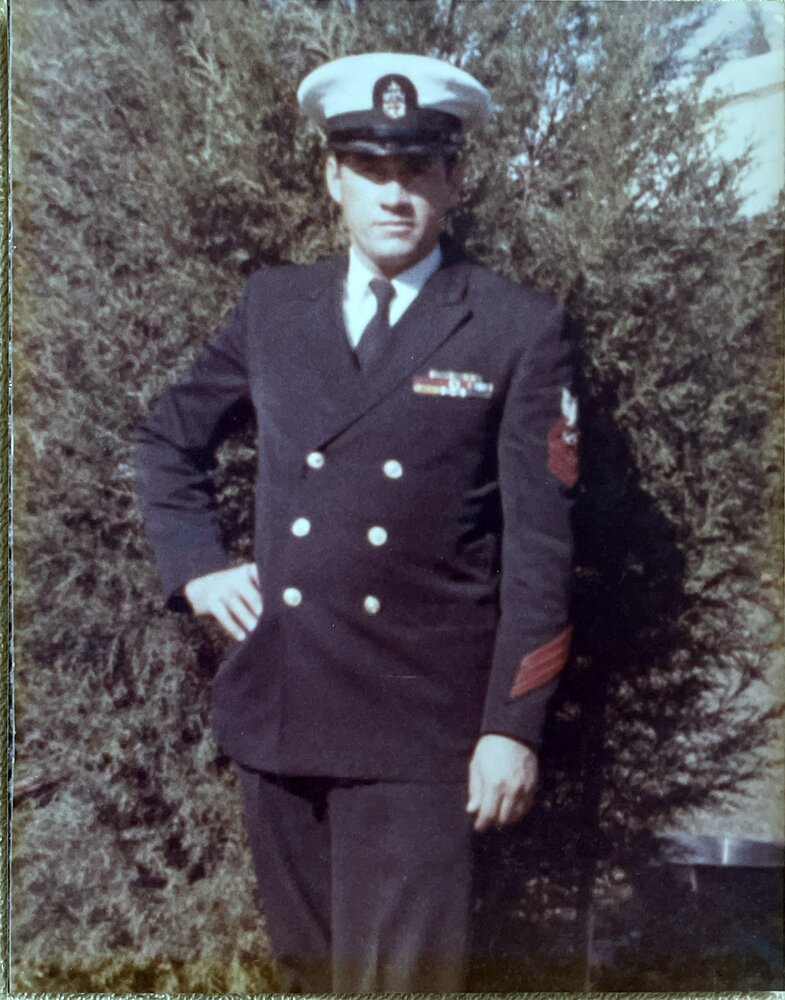 Please share a memory of Herbert to include in a keepsake book for family and friends.
View Tribute Book
CPO Herbert Sneed Sr., USN (Ret.), 86, of the Wolftown community, was welcomed into the arms of the Lord on Friday, August 26. He passed away peacefully at his home surrounded by his loving family after a long illness originating from his service to his country and tribe. Herb was born in Cherokee and was the son of the late Ernest and Leauna Sneed. He grew up learning to farm, hunt and work with Wolftown Free Labor, alongside his dad, before enlisting in the US Navy in 1952. Making a career of the Navy, Herb came to love the sea as he served as a Seabee, diver and Vietnam Veteran, retiring after 30 years of service. Herb met and married the love of his life, Merlina, while serving overseas. After his active-duty retirement, they returned to Cherokee and raised five children while he worked as the Engineering Equipment Operator Foreman for the BIA Roads Division. He retired from the BIA and continued employment as the tribe’s Engineering Foreman for the Roads Division before retiring a third time. In his retirement, Herb loved spending time with his family. He enjoyed fishing and hunting and continuing his talents with woodwork and farming. He often times could be found around the home property on his bulldozer, working on his equipment or caring for his Chevys. Herb was a huge Cherokee Braves fan and supported them through his children’s school years and into his grandsons’ football years. He enjoyed what he considered the fine living of home cooked meals with his favorites being traditional dishes and buttermilk and cornbread. Herb was a God-fearing man, lived by the word of the Lord, and had last attended Macedonia Baptist Church. Along with his parents, Herb was preceded in death by his brother, Ernest “Bud” Sneed Jr., his sister, Winnie Lee Nunez, and his grandson, Shane Sneed. He is survived, and will be dearly missed, by his wife of over 50 years, Merlina, and his five children, Robert (Jaclyn), Herb Jr., Bo (Bobby), Michelle (Ray) and Nena (Zach), his granddaughters Jaisa (Justin), Carter, Dorien (Nick), Drew (Nick), Talon (Tony), Kamea (Michael), Brynn, Monroe, Alisha and Shay, his grandson Johnny and great-grandchildren Marlie, Rogue and Oscar. Herb is also survived by his brothers Hill, Jimbo, and Piney; sisters Gertha and Carie Lou and many extended family members and special friends. Pallbearers are son Herb Sneed Jr., sons-in-law Ray Long, Zach Loch and Bobby Stone, grandson Johnny Long, nephew Paul Sneed and grandsons-in-law Justin Kearns Nick Jones, Michael Lopez and Nick Buchanan. The family would like to extend a special thank you to Four Seasons Hospice and special friends at Tsali Care Center. Visitation will be held beginning at 5pm on Thursday, September 1, until the hour of service at 11am on Friday, September 2, at the Wolftown Gym. Burial with military honors will be at the Shane Sneed Memorial Garden Cemetery. Chaplain Donny Edwards will officiate. Services will be provided by Crisp Funeral Home. The family encourages the use of masks by those that have traveled outside the area to protect the elders and high-risk individuals that are attending the services to pay their respects.
To plant a beautiful memorial tree in memory of Herbert Sneed, please visit our Tree Store
Thursday
1
September

Look inside to read what others have shared
Family and friends are coming together online to create a special keepsake. Every memory left on the online obituary will be automatically included in this book.
View Tribute Book
Share Your Memory of
Herbert
Upload Your Memory View All Memories
Be the first to upload a memory!
Share A Memory
Plant a Tree