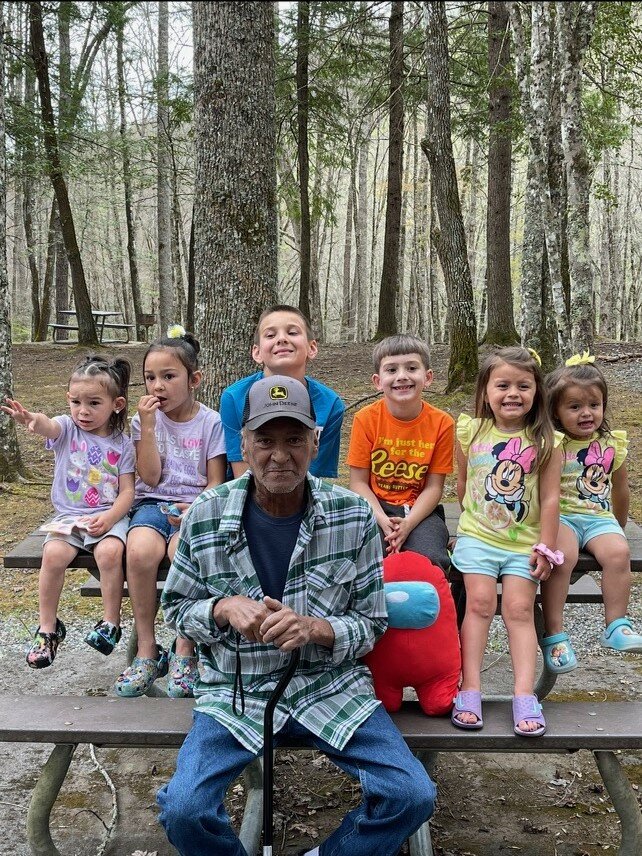 Please share a memory of Jackson to include in a keepsake book for family and friends.
View Tribute Book
Jackson Wolfe, 63, of the Big Cove community went home to be with the Lord on August,16,2022. After a battle with Lung Cancer and COVID. He was the son of the late Amble Springer Wolfe and the late Eva Queen Wolfe. Jackson was a member of Eastern Band of the Cherokee Indians and a Cherokee fluent speaker. He was a loving father and grandfather and supported them in all of their endeavors. In addition to his parents, Jackson is preceded in death by his sister Jane Wolfe, nephews Wade Wolfe, James “Bugg” Wolfe, and Chase Wolfe. Sister-in-laws Elsie Taylor Wolfe and Kathy Swayney Wolfe, and Cookie Kanott Wolfe. At a young age, Jackson started the trade of logging with his brothers, which he passed along to his son Samuel. Jackson loved the game of fastpitch softball but more importantly he loved watching his kids play the game. He taught both of his children to play and love the game as much as he did. He will always be known on the field for his wicked knuckle ball. Jackson is survived by his two children; Amanda (Matthew) Moore and Jackson Samuel (Samantha) Wolfe. He is also survived by his five grandchildren; Wyatt Russell, Mattie Awee, Hartleigh Addison, Britt Jolene, and Ella Lydia. He also leaves behind is companion of 13 years Susan Nicholson, her grandson Jionni, and her children. Jackson was one of eleven children, he is survived by his siblings: Deweese Wolfe, Jimmy Wolfe, Noah Wolfe, Jasper Wolfe, Jonah Wolfe, Abel Wolfe, Stacy Wolfe, Nancy Wolfe, and Frances Maney. He also leaves behind one aunt Myrtle Bird. In addition, he is survived by many, many nieces and nephews. Visitation will be held on Thursday, August 18th, 2022 from 12 pm to 2 pm at Crisp Funeral Home in Bryson City. A funeral service will follow visitation starting at 2pm at Crisp Funeral Home. Burial will be in the Wolfe family cemetery. Upon request of the family, Truman Taylor and Kenny Davis will be making formal addresses during the funeral service. Pallbearers will be Kensen Davis, Steven Hyatt, P-nut Walkingstick, Wade Wolfe, Quincey Watty, Omar Yanez, Colby Yanez, Malachi Taylor, Jamy Saunooke, and Justin Cline. Honorary pallbearer will be his grandson Wyatt Russell Moore.
To plant a beautiful memorial tree in memory of Jackson Wolfe, please visit our Tree Store
Thursday
18
August

Look inside to read what others have shared
Family and friends are coming together online to create a special keepsake. Every memory left on the online obituary will be automatically included in this book.
View Tribute Book
Share Your Memory of
Jackson
Upload Your Memory View All Memories
Be the first to upload a memory!
Share A Memory
Plant a Tree