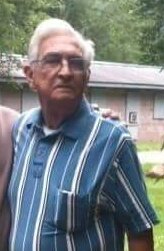 Please share a memory of Ray to include in a keepsake book for family and friends.
View Tribute Book
Ray Robinson, 85, of the Painttown Community joined his wife Rosalee in Heaven on Friday, April 8, 2022. A native of Andrews, NC and longtime resident of Cherokee, NC, he was the son of the late Minnie Robinson. In addition to his mother, he was also preceded in death by his wife, Rosalee Lambert Robinson; brothers, Jack Robinson, Wallace Robinson, Dean Robinson, Spencer Robinson, and Jerry Robinson, and one sister, Jean Robinson. Ray was a meat cutter for many years. He opened the first Ingles Supermarket, and then worked at Qualla Supermarket where he became known as the Pork Chop Man. He is survived by his daughter, Renee Tiger and husband Sam of Cherokee; granddaughter, Megan Wynn (Earl Owle) of Cherokee; great granddaughter, Madison of Cherokee; sister, Ramona Rice of Marshall, NC; a special nephew, Price Robinson of Cherokee; several nieces and nephews; special friend, Dale of Bryson City; best friend, Don Bowman of Cherokee, and his beloved dog, Honey Dog. The family will receive friends from 5:00 PM until 7:00 PM Monday, April 18, 2022 at Crisp Funeral Home.
To plant a beautiful memorial tree in memory of Ray Robinson, please visit our Tree Store
Monday
18
April

Look inside to read what others have shared
Family and friends are coming together online to create a special keepsake. Every memory left on the online obituary will be automatically included in this book.
View Tribute Book
Share Your Memory of
Ray
Upload Your Memory View All Memories
Be the first to upload a memory!
Share A Memory
Plant a Tree