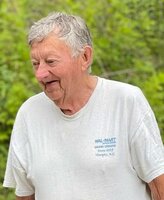 Joe Lawson Campbell (Pop), 89, of Bryson City went home to be with the Lord on Saturday, January 21, 2023. A native of Graham County and current resident of Swain County, he was the son of the late John and Nancy Farley Campbell. In addition to his parents, he was also preceded in death by his brothers, Junior Campbell, and Clarence Campbell; a sister, Betty Sellers, and children, Joann Parton, Bobby Campbell, and Charlie Campbell. He is survived by his children, Rosa Campbell Norris (Tony) of Bryson City, and Russell Campbell of Bryson City; 9 grandchildren; 10 great grandchildren; 8 great-great grandchildren; 2 brothers, Arch Campbell, Vader Campbell, and a sister, Kathleen Frizzell. A celebration of life will be held 2:00 PM Saturday January 28, 2023 at Hightower Baptist Church. Revs. Sam McMahan and Brad Day will officiate. In lieu of flowers donations may be made to help with funeral expenses to, Crisp Funeral Home at PO Box 1639 Bryson City, NC 28713.