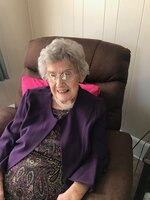 RUBY VIRGINIA (WARD) MORGAN Ruby Virginia (Ward) Morgan of Bryson City, b. February 21, 1921 passed peacefully into the arms of Jesus on Tuesday, January 17. She was the widow of Basil Morgan who passed in 1982. Ruby was born in Jackson County in 1921, the second of 13 children. She was raised in the Barker’s Creek Community. Her parents were Narvie Washington Ward and Lula Azalee Ward. She is survived by 3 daughters; Mary Stewart, Jodi Kesselring, and Linda Gordon; six grandchildren; eleven great grandchildren and 4 great, great grandchildren. A fourth child, a son, Donald Morgan passed in 2007. February 21, 2021, (her 100th birthday) was declared by proclamation from Bryson City Mayor Thomas Sutton as Ruby Morgan Day. Services will be held at Victory Baptist Church in Bryson City, January 21 at 12:00 pm. The Family will receive friends one hour prior to the services. The family asks that in lieu of flowers, a house plant be sent or donation to PAWS or St. Jude Hospital be made.