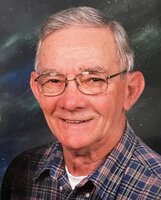 Phillip Donald Brooks, 85, of the Needmore Community went home to be with the Lord and rejoice with family that preceded him on Monday September 12, 2022. A longtime resident of Swain County, he was the son of the late Thomas and Edith Brooks. In addition to his parents, he was also preceded in death by two daughters, Donna Jo Wolfe, and Beverly Denise Howard; one sister, Betty Fulford, and a brother, Lanny Brooks. Phillip was the oldest known active member of the West Swain Fire Department. He loved his brothers there and faithfully served the department for 16 years. He is survived by his wife of 57 years, Jean Breedlove Brooks; children, Tonya Brooks Rochester, and Phillip Brooks II and wife GiGi; 8 grandchildren, and numerous great grandchildren. Funeral Services will be held 11:00 AM Saturday at Crisp Funeral Home Chapel. Brother Tony Cochran will officiate. The family will receive friends from 10:00 AM until 11:00 AM at the Funeral Home. Pallbearers will be his brothers from the West Swain Fire Department.