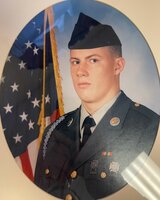 Christopher (“Chris”) Matthew Wiggins, beloved son, grandson, brother, uncle, nephew, cousin, and friend went to be with the Lord on Friday, October 29, 2021 in Westwego, Louisiana. Chris was greeted in Heaven by his maternal grandparents, Maggie Alice Crisp and husband, Dr. Earl Crisp and his aunt, Nanette Crisp; paternal grandfather, James Hampton, in addition to many aunts, uncles, and cousins. Chris was a lover of life and had recently celebrated his 47th birthday prior to his passing. Chris was born on September 25, 1974 at Swain County Memorial Hospital. He was the son of Roger and Celeste Wiggins. Chris grew up on Airport Hill and later moved to Deep Creek, where he developed a love of the outdoors and participated in many activities such as fishing, kayaking, snowboarding, and camping. Chris graduated from Swain County High School in 1993. After graduation, he enlisted in the United States Army, where he served in the 101st Airborne Division as a paratrooper. Chris served his country honorably and received the following decorations and citations: Parachutist Badge; Sharpshooter Marksmanship Badge Grenade; Marksman Marksmanship Badge Rifle M-16; National Defense Service Medal; and Army Service Ribbon. Chris was stationed in Vicenza, Italy where he had the privilege of participating with his Division in the commemoration of the 50th anniversary of D-Day, which consisted of parachuting over Normandy and staying with French Nationalists who were part of the French Resistance during World War II. After his enlistment, Chris dedicated himself to developing his rock, marble, and tile company into a successful endeavor. Chris completed projects in Wilmington, Asheville, Atlanta, and in New Orleans. He was known for his skilled craftsmanship and work ethic. Chris was a lover of life, family, friends, and his dog, Bo. Chris will be remembered for the size of his heart, his perseverance, and his huge smile. He is survived by his loving parents, Roger and Celeste Wiggins; his spunky paternal grandmother, Jessie Hampton, his adoring sister, Whitney Harris (Joseph); and younger brother, Dr. Will Wiggins (Tiffany); nephews, Colby and Carter Kirkland; nieces and nephew, Savanna, Layla, and Logan Wiggins; his faithful companion dog, Bo. Chris will be greatly missed by his family and all those who loved him. The family will receive friends on Monday November 15th from 1:00 until 2:00 pm at Crisp’s Funeral Home in Bryson City, North Carolina. Funeral services will follow at 2:00 pm A military graveside funeral at Swain Memorial Park will be conducted to honor Chris’ service immediately following the memorial service at Crisp Funeral Home.