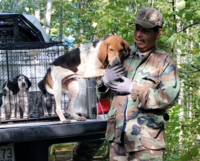 Thomas Edward Welch 9/15/65 - 9/28/21 Tommy is proceeded in death by mother Agnes Lossiah Welch father Simpson Welch brothers Sam Welch and Jesse welch and sister Frieda Panther he survived by brothers Mickey Welch Abraham Welch Davis Welch Charlie ute Welch Joe Welch and James Welch sisters Sharon Panther and Madi Wildcat Life companion Angie Smith and Lucille Smith who was like a mother, son Charles "squeak" Smith " (alexis) them grand babies of his carleigh and Kylie special nieces Reese and kesha and nephew Justin French Tommy lived his life one season at a time which started with crawfish/fishing season to sang season/bear/mushroom season to squirrels/pig season and was an avid woodsman with a need to find out whats over the next ridge and knowed the woods like the back of his hand day or night, he was a well know and sought after land clearing operator for the "tuff stuff" the steeper and rockier the better and he also love a bottomless swamp and was also well know for his capabilities with a chainsaw which he won alot of money on bets for tree placement for staying quite and letting the talk start them handling buisness but his off time changed up a little bit when the grand kids where born then he was at the mercy of them which got anything they wanted no matter what mom and dad said ...... Let the next patch be full of four prongs and the trails wide open Funeral Services will be held 1:00 PM Monday in the Chapel of Crisp Funeral Home. Pastor Dan Conseen will officiate with burial at Taylor Family Cemetery. The family will receive friends from 11:00 AM until 1:00 PM Monday at the Funeral Home.