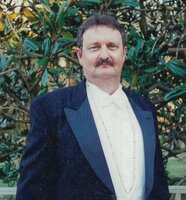 David Ralph Anthony, 71, of Bryson City went home to be with the Lord Wednesday, September 1, 2021. A native of Swain County he was the son of the late Charlie and Edna DeHart Anthony. In addition to his parents, he was also preceded in death by one son, Bob Anthony, and one brother, Junior Anthony. He is survived by his children, Katie, Becky, Sam, Sara, Jody, Michael, Hannah, Joshua, David Stephen, and Malana; one sister, Margaret; one brother, James, and a multitude of grandchildren, nieces and nephews. David worked at the Swain County Hospital for many years, and then moved on to work at the Oconaluftee Job Corps in Cherokee until he retired. He was a Swain County Commissioner, and was also on the Swain County School Board. Funeral Service will be held 3:00 PM Sunday at Crisp Funeral Home Chapel. Rev. Ned Welch will officiate with burial at Lauada Cemetery. The family will receive friends from 2:00 PM until 3:00 PM Sunday at the Funeral Home.