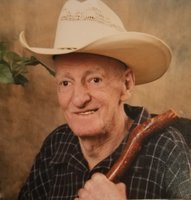 Prince Bard, 76, of Bryson City went to be with the Lord on May 16, 2021. He was born in Swain County on January 27, 1945 to the Late Robert and Charlotte Bard. Prince worked at a local sawmill for many years. He was of the Baptist Faith and was a strong believer in his Lord and Savior, Jesus Christ. Prince loved to pick his guitar and sing. His favorite artist was Hank Williams Sr. He had many friends that he loved dearly and he will be missed by many. Mr. Bard is survived by one sister, Rose Jordan of Forest City, North Carolina; one brother, Grady Bard of Groton, Connecticut and several nieces and nephews. In addition to his parents he is preceded in death by two brothers, John Winfred Bard and Thomas Robert Bard and one sister, Christabel Hall. A memorial service service will be held at Mountain View Manor on Friday May 21, 2021 at 10:00am; all are welcome to attend. Crisp funeral home is assisting the Bard family with arrangements.