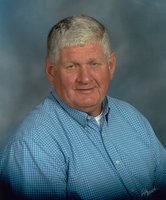 Charles Orris Hughes, 82, of Bryson City went to be with the Lord on February 21, 2021. Mr. Hughes was born in Swain County on April 16, 1939 to the late Winford and Mae Hughes. He was of the Baptist faith and was a member of Victory Baptist Church where he served as a Trustee. He served his county in the United States Army First 73rd Artillery Division in Fort Hood, Texas. Charles also served on the Bryson City Fire department for fifty years. He retired from the North Carolina Forest Service after thirty years of service. He also owned and operated the Gulf Station for many years and was instrumental in the Bryson City Riding Stables. In his free time he enjoyed woodworking and spending time with family. Charles is survived by two sons, Joey Hughes (Cylena) and Rick Hughes and one grandson, Chase Hughes. In addition to his parents, he is preceded in death by his wife Debbie Breedlove Hughes; a sister Sue Conger; brother in law Buss Conger, and nephew Harvey Conger. A funeral service will be held on Wednesday, February 24, 2021, at 2:00pm at Victory Baptist Church. Brian Schuler and John Stevens will officiate. The family will receive friends from 1:00pm until 2:00pm prior to the service. Aurther Dillard, Bobby Jenkins, Wayne Parton, Larry Roland, Ron Gormick, and Jim Mathis will serve as pallbearers. John Leer, Jim Myers, and Tommy Shuler will serve as honorary pallbearers. Crisp Funeral Home is assisting the Hughes family with arrangements.