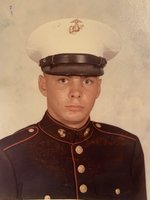 Jackie Lee Hornbuckle, 63, of the Birdtown Community passed away peacefully at Mission Memorial Hospital after an extended illness. He was born on January 17, 1957 to the late Johnny and Edna Locust Hornbuckle, grandparents-Will and Mary Maney Hornbuckle and Noah and Pearl Smith Locust. He is preceded in death by his loving daughter Leighann Hornbuckle, two brothers, William Jefferson Hornbuckle and Samuel Ray Horn Buckle, two sisters, Barbara George and Carol Hornbuckle. He is survived by one daughter, Edna R. Hornbuckle, and one stepdaughter Arlenea (Ede) Gomez. He leaves behind one sister Lily (Aaron) Bradley, one brother John (Brenda) Hornbuckle; Grandchildren, Cheyenne, Anela, and John Dillanger, Ashton, Bobby Joe, Kayleigh, Samuel, Kyle, Sean, and Isabella. Two Special nieces who helped him out a lot, Ashley Bradley, Candi Bradley, and a special friend Gary Sneed. Mr. Hornbuckle served his country in the United States Marines Corps. He formerly worked for the Cherokee police department as a dispatcher, for Ready Mix Concrete as a truck driver and also worked as a heavy equipment operator. He later worked for the BIA Forest Service fighting fires. Later he retired from the Great Smoky Mountain National Park as a maintenance worker. He loved playing fast pitch softball for the Birdtown Warriors as the catcher. He had many talents such as a being an avid auto mechanic, a great artist making unique woodcarvings, and he could paint beautiful pictures. He was also a member of the Native Street Machines. He also leaves behind many friends and will be missed dearly. A Funeral service will be held on Thursday, January 14, 2021 at the Chapel of Crisp Funeral Home. The family will gather at 1:00pm prior to the service. Burial will follow at the Hornbuckle Family Cemetery. Pastors Gil Breedlove and Dan Conseen will officiate.