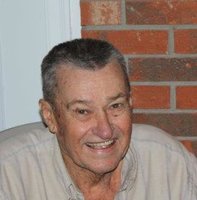 Paul Robert Styles Oct. 26, 1932-Dec. 24, 2020 Paul R. Styles passed away on Thursday, Dec. 24, 2020 after a long battle with Alzheimer’s Disease. Paul was born on Indian Creek to Lawson Styles and Helen Cline Styles on Oct. 26, 1932 in what is now the Deep Creek section of the Great Smoky Mountains National Park. Paul and his family were one of the last families to move out of the Smokies on the North Carolina side as the Park was created. He graduated from Swain County High School and served in the United States Army overseas in Japan as a Military Policeman during the Korean War. Paul was married to his wife Carol “Snookie” Hamilton Styles for almost 70 years. He worked on various tunnel jobs in Chicago, Maryland, Massachusetts, Connecticut, New York, California and Niagara Falls before returning to Bryson City in the early 1960s to start his own construction business, Styles Brothers Construction, with his brother Edgar. He also had his own business, Styles Septic Tank Service, that he ran with his wife and son Bobby. The Lord continued to bless Paul as he was able to keep on working even past retirement age. He built Styles Food Mart which he, his wife, and Bobby ran. His final business was Styles Fast Lube which he and Bobby operated. He was a hard worker and instilled the value of hard work into his family. Paul was a loving husband, father, and Papaw. His grandchildren and great-grandchildren were endless sources of delight to him. He also took joy in fishing and horseback riding in the Park and putting out a big garden and sharing the produce from his garden with his family, neighbors and widows in the community. He enjoyed living on Hyatt Road off East Deep Creek Road and his neighbors were his good friends. Paul was a member of the Deep Creek Baptist Church. He loved going to church and he loved his church family. Even during his decline due to dementia, Paul could still remember and sing the words to many hymns and he still remembered how to pray. The congregation of Deep Creek Church remained a constant source of love and support to Paul, Snookie, and the rest of the family over the course of Paul’s illness. During the last five years of his life, Paul was a resident of the Black Mountain Neuro Trauma Center where he was well cared for with great skill, love and respect. The family will never be able to repay the staff- especially the workers on the G3 wing- for their kindness and love to not only Paul, but to his family during his stay at the Center. Paul was preceded in death by his parents, his brothers James, Edgar, and Billy Styles and his two sisters Della Bright and Catherine Winchester. He is survived by his wife, Carol “Snookie” Styles, sons Bobby Styles (JoAnn), Kirby Styles (Kim) and daughter Sandra English (Lee). He is also survived by his grandchildren-Bobbi Jo Jenkins (Jeff), Sam English, Nick English (Laura), Heather Styles-Turbyfill (Jared), and Emily Styles and his great grandchildren -Caleb Rowland, Norah Dunlap, and River, Sean, Hunter, and Summer English and their mother Jennifer English. He also leaves behind many beloved nieces, nephews, brothers-in-law and sisters- in-law. Due to the pandemic, the family will be having a private service with immediate family only. Reverend Mike Cogdill and Reverend Brent Stewart will officiate. In lieu of flowers, please consider making a tax exempt donation to the Black Mountain Center Foundation, Inc. More information can be found at bmc-foundation.org and you can donate online at the same link. Or if you would like to mail a donation, the address is: Black Mountain Center Foundation, Inc 932 Old US 70 Hwy Black Mountain, NC 28711. The family would like to thank you for your prayers at this time. By God’s grace, we can be sure that all those who trust in the perfect gift of His Son will meet again one day on the other side.