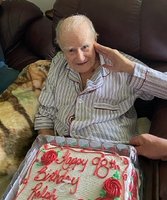 Ralph Edward Amburn, 98, of Bryson City, North Carolina and formally of Detroit. Michigan, went home to be with the Lord on August 17, 2020 at his residence on Franklin Grove Church Road. Funeral services will be held at Crisp Funeral Home on August 19, 2020 at 11:00 a.m. with Reverend Justin Hunt of Rock Creek Baptist Church officiating. Burial will be at Swain Memorial Park, Deep Creek, Bryson City, North Carolina. Visitation will be held at Crisp Funeral Home on August 19, 2020 from 10:00 a.m.to 11:00 a.m. Ralph Amburn was born in Copperhill, Tennessee to Cargus and Ella Mae White Amburn on June 26, 1922. He graduated from Proctor High School in 1941. At the beginning of World War II, he enlisted in the United States Navy where he served three years. During this time, he was the recipient of five battle stars for honor and valor. After he left the Navy, he went to Detroit, Michigan, where he worked as a welder for the Chrysler Corporation for over forty years. At the age of 95, he came back to Bryson City to live with his sister, Willa Lowe. Ralph is survived by his sister, Willa Lowe of Bryson City. He is also survived by several nephews and nieces. He is preceded in death by his parents, Cargus and Ella Mae White Amburn; his sisters, Ruth Lowe, Louise Amburn, and Edna Jenkins; brothers, Jack Amburn and Bobby Amburn. The family wishes to express their love and gratitude to their neighbors, Home Health, Senior Living Center for the meals, and the late Reverend Charles Ray Ball who visited Ralph almost daily. Ralph was a kind and generous man who was devoted to his family. He will be greatly missed by all who knew him.